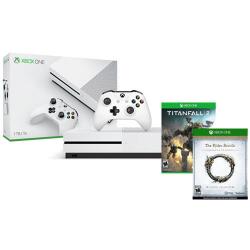 Sleeker, slimmer, sharperIntroducing the new Xbox One S. Play the greatest games lineup, including Xbox 360 classics, on a 40% smaller console. Experience richer, more luminous colors in games and video with High Dynamic Range. Stream 4K video on Netflix and Amazon Video, and watch UHD Blu-ray movies in stunning 4K Ultra HD. Then get the enhanced comfort and feel of the new Xbox Wireless Controller, featuring textured grip and Bluetooth.40% smaller consoleDon't let its size fool you. With an internal power supply and up to 2TB of internal storage, the Xbox One S is the most advanced Xbox ever.The best controller just got even betterThe new Xbox Wireless Controller features a sleek, streamlined design, textured grip, and Bluetooth for gaming on Windows 10 devices. Enjoy custom button mapping and improved wireless range, and plug in any compatible headset with the 3.5mm stereo headset jack.Play Xbox 360 games on Xbox OneXbox One backward compatibility-the #1 fan-requested feature-is now reality. Play a growing number of your Xbox 360 games on Xbox One at no additional cost. And with hundreds of titles being added in the months to come, Xbox One is now the best place to play your Xbox 360 games.Play together with GoldWith the most advanced multiplayer across Xbox One and Windows 10 PCs, Xbox Live is the world's premier gaming community. And with Xbox Live Gold, you get the most advanced multiplayer, free games, exclusive member discounts, up to 50-75% off games in the Xbox Store, and more.

Up To 70% Off Dresses Sale @ shopbop.com

Up to 50% Sale including Gift Sets @Clinique