Manchester to Phuket travel deals From £839

London to Singapore Business from £3897

1.5% Cash Back 2% Super Cash Back
Exclusions may apply.
Activate Coupon

1.5% Cash Back 2% Super Cash Back
Exclusions may apply.
Activate Coupon

From £691 For Flight From London To Abu Dhabi Economy

From £760 For Flight From London To Bangkok Economy

London to Lahore Economy Flights from £483

London to Male Economy Flights from £898 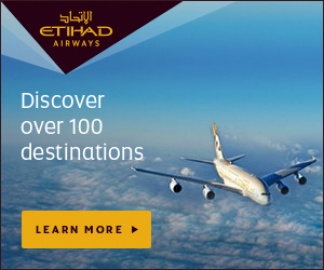 Etihad Airways: Etihad Airways is the national airline of the United Arab Emirates and has grown into the world's leading airline in just eight years. "Etihad" is Arabic, meaning "union". Etihad was established in July 2003 under
the Royal Decree and began commercial operations in November of the same year. Since then, it has become the fastest-growing airline in the history of commercial aviation, one of the three major bandit airlines in the Middle East.
... »