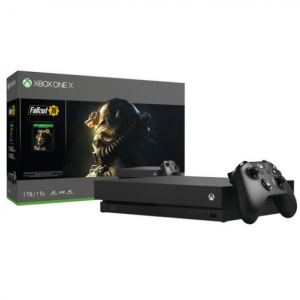 Experience a true 4K and HDR gaming experience with the Microsoft Xbox One X. With 6 Teraflops of graphical power and 12GB of GDDR5 VRAM, the Xbox One X can play games with native 4K resolution running at up to 60 frames per second (fps). It also supports AMD FreeSync, when paired with a compatible monitor, which reduces screen tearing. The Xbox One X also supports HDR10 for a higher contrast ratio.

With a 4K UHD Blu-ray Disc player, the Xbox One X can play UHD Blu-ray Discs. The Xbox One X features an HDMI 1.4b input and an HDMI 2.0b output. It also has three USB 3.0 ports as well as an IR out port. For audio, the Xbox One X has a S/PDIF output that supports DTS 5.1, Dolby Digital 5.1, and Dolby TrueHD with Atmos. Go online via wired Ethernet LAN or wireless dual-band Wi-Fi. Sign up for an Xbox Live Gold membership in order to play online multiplayer.

An Xbox Live Gold subscription is required for Fallout 76.

ExpMicrosoft Trade-up to Xbox One X