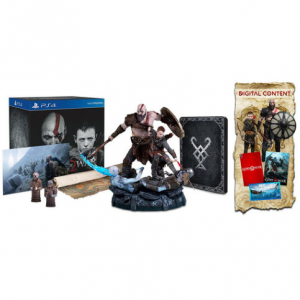 In God of War Collector's Edition from Sony, Kratos has been living outside the shadow of the gods. He must adapt to unfamiliar lands, unexpected threats, and a second chance to being a father. Together with his son Atreus, the pair will venture into the brutal Norse wilds and fight to fulfill a deeply personal quest.

In addition to the full game, the God of War Collector's Edition comes with a 9" Kratos and Atreus statue by Gentle Giant, a limited edition SteelBook case, 2" Huldra Brothers carvings, an exclusive lithograph, and a cloth map. There is also included digital content, such as the Death's Vow Armor Set, Exile's Guardian Shield, the God of War Digital Comic #0 and God of War Digital Mini Artbook (both by Dark Horse), and a dynamic theme.