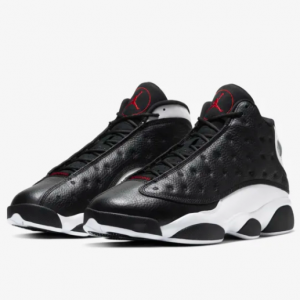 The Air Jordan XIII first hit shelves in November 1997, as MJ rocked the singular silhouette in pursuit of his sixth world title. Months later, the style continued to make waves with its debut on the silver screen. The storied design is now back sporting those familiar hues, but with reverse color blocking. An upper of black, textured leather gives way to neutral white accents across the mudguard, outsole and heel. Hits of red branding on the toe box, tongue and insole bring the look home.

Since his game-winning shot that brought championship glory to North Carolina, Michael Jordan has been at the forefront of basketball consciousness. He took the court in 1985 wearing the original Air Jordan I, simultaneously breaking league rules and his opponents' will while capturing the imagination of fans worldwide.

Sitewide Sale @ Make Up For Ever

Up to 45% off Nike Clothing, Shoes & Accessories Sale @ Nordstrom Rack