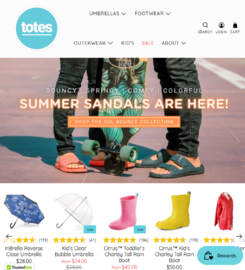 In 1924, totes was founded in Oakley, Ohio, a small suburb of Cincinnati. The plant was moved to Loveland, Ohio in 1942 where the very first totes rubber rain boots were manufactured. These rubber rain boots, called "totes" to emphasize how portable and easy-to-carry they were, eventually became the company's most popular product. In 1961, Brad Phillips, a Chicago businessman, bought the company and changed the name to totes, Incorporated. In 1970, totes introduced the first easy to fold collapsible umbrella in the United States and it quickly became a hit. In the 1970s, in addition to the folding rain umbrella, many products were introduced under the totes name, including totes rain scarves, rainwear, hats, expanding bags, and slipper socks. 1985 brought the development of the Chromatics program, a line of weather products targeted to the supermarket, drugstore, and mass merchandiser trade classes.

Saks Fifth Avenue - Up to 50% Off Designer Sale

Coach Memorial Day Sale - Up to 40% Off Select Styles

Champion USA Memorial Day Sale - Up to 40% Off Sitewide

One Day Only！2022 Upgrded The Rose Toy for Women with 10 Modes Small Portable Privatewith Washable..