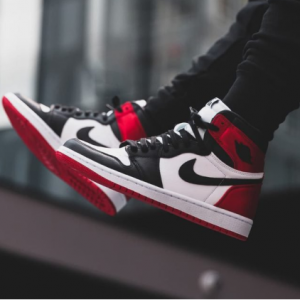 The Air Jordan I changed footwear forever. The original 'Black Toe' colorway was essential in establishing the silhouette as a cultural icon. The latest iteration is a luxurious take on the classic colorway that adds satin to the upper and heel in tandem with the OG Air Jordan I sole.

Since his game-winning shot that brought championship glory to North Carolina, Michael Jordan has been at the forefront of basketball consciousness. He took the court in 1985 wearing the original Air Jordan I, simultaneously breaking league rules and his opponents' will while capturing the imagination of fans worldwide.